I did a number of freelancer jobs in the last few years. That helped me immensely in learning to work with clients.

Animation for a documentary intro in 2011
Sometime in my second year of university I got in touch with Elaine who at the time lived in Japan. She asked me to do a 2d animation intro for a japanese documentary about football.
The project got to the rough animation outline stage, which she really liked.

It was going great. However at that time the power plant disaster hit Japan, so  the project was discontinued. I'm not sure that was the cause but it looks like it is related somehow. I did not get paid  yet. She is very nice  - recommending me to other people. Sometimes a project will get discontinued, not because the client is bad or you are bad. It's just life- nothing is certain. So get payment in advance- to guarantee you are not working for free. 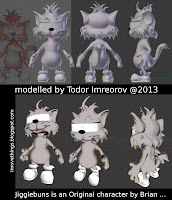 I was to model, texture and rig a character based on a single reference image- for the front view. The character design is by a guy called Brian. We got this to the end of the modelling part + his requested revisions. He wasn't sure what he wanted for the character. He asked for revisions which were not included in his own concept art (like adding more fur, a bigger and more defined bum and in the end even adding pants)...It's a cat with a big butt that jiggles when dancing. Do you get that impression from the picture? :D 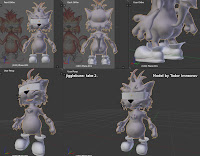 I made sure that the contract I requested for the project includes a clause for the extra features. In the end I didn't get a contract to sign and there was no NDA. I haven't heard from the client in almost half a year now so I  post the WIP screen shots declaring this project to be dead. A few hours worth of work wasted, but at least I have the model and some screenshots :)
This experience taught me about the importance of freelance job contracts. Really really tight contracts with detailed clauses. It's something that I should have started working on after having such a contract sorted. It also taught me the importance of getting to know a client. The more you know, the better for both of you.

The  Salmon Road
In 2009 I made a book cover illustration.

It was a proper paid job with a contract. I worked closely with the publisher to make sure the book looks good when printed.  The client in that case was a smart guy who knew exactly what he wanted and worked very closely with me to get it. He had a lot of input on it. Everything was A-ok, everyone was happy in the end. I got paid as expected.

I learned two things from the job. First of all Printing technology has a limited colour Gamut compared to rgb. It's important to get your colours in that gamut (CMYK mode) and show the client how it will look like when printed. Colours can completely change the mood of a piece. details may get lost in printing. You may have to do lots of colour correction and print tests.
The second thing was about creativity. My first version of the cover was in caligraphy style. It was originally intended to be on one of the pages of the book. The bird had no colour- it was stylized. But the client requested that I put it underwater, give it volume, give it colour. That is when I realized- It's not my vision- it's his. And I must follow it as closely as possible even if I have to loose something that was good in the first place. I may always have an ideal version of the work in my head, but the one that is to be submitted should and must fit with the vision of the client.


The Working Academy jobs
Since the start of 2013 I have been taking part time freelance jobs for
the working academy at Bradford University.

They are a bit like an agency and have real company clients. I am currently doing some work for them.
There is no NDA in this perticular case, so I can share previous work.
The BBC and The Bradford Media Museum needed three mini games for the big screen in town - and to be used at festivals. The working academy hired me to create some animated sprites for the games. I had to make sure they are made in a way that is good for the programmers - in this case "Gaslight Games" - a local game's company. The highlight of that experience was spending a day at Gaslight Games to finish off the sprites and fix some stuff on other people's sprites.


Some lessons learned over the years 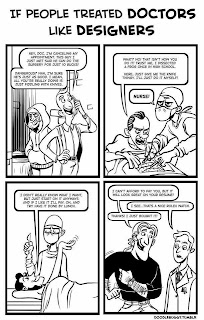 It will be great to get some input from you folk of the web? Do you have any client stories you'd love to share? Any advice on working as a freelancer? I want to hear from you, learn from you. :)
So far the more freelancing I do, the more it makes me wish I had a normal job.